South Korean giant Samsung has publicized its Galaxy A9 smartphone at a launch event in China. Samsung’s newest smartphone has a 6-inch screen and contains a non-removable 4000 mAh battery.

According to IBNLIVE, running on Android Lollipop 5.1, the smartphone has a fingerprint scanner and supports the mobile payment service Samsung Pay that has recently been launched in Asia. 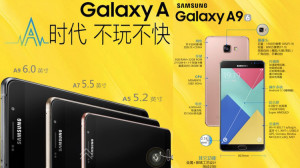 Reportedly, it features a 13-megapixel rear camera with OIS and f/1.9 aperture, and an 8-megapixel front camera. Under its hood is a 64-bit octa-core Snapdragon 652 processor paired with 3 GB of RAM. The phone comprises an internal storage of 32 GB, which can be further extended using a microSD card of up to 128 GB capacity.

The new phone is set to go on sale in China in January 2016. The South Korean giant hasn’t yet declared release dates for other markets.

Abhinaya Ghimire is a tech savvy person who loves keeping information about ICT and media. Graduated from Kathmandu University in Bachelor of Media Stuides, he is equally involved in making short films, documentaries and also has his own photo blog www.abhieg.wordpress.com
@ghimire_abhi
Previous Apple hires eight hundred engineers to improve its camera on iPhones
Next 3D game wins Ncell app camp 2015

We all have friends with whom we share our mobile phones. While sharing our phones …