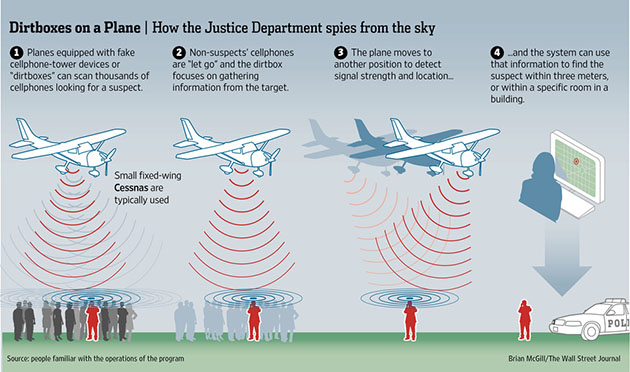 According to Wall Street Journal US, Marshall  service is gathering data from thousands  of American bu using fake communication towers on airplanes. The information is collected including both suspects and innocent American.

The Justice department under which the program  is carried out uses Cessna planes flying from at least five major airports and covering most of the US population, the newspaper said, citing people familiar with the operations.

The planes use devices made by Boeing that mimic the cell phone towers used by major telecommunications companies and trick mobile phones into revealing their unique registration data, the report said.

The program is similar to one used by the National Security Agency which collects the phone records of millions of Americans in order to find a single person or a handful of people.

The newspaper said it was unknown what steps are being taken to ensure data collected on innocent people is not kept for future perusal by authorities.

Christopher Soghoian, chief technologist at the American Civil Liberties Union, called the program “a dragnet surveillance program. It’s inexcusable and it’s likely, to the extent judges are authorizing it, they have no idea of the scale of it.

While not too much is known about this method, it is said that it can also intercept text messages and even photographs being sent, which is another huge security risk which may have absolutely no oversight. And the government being irresponsible with such data is the last thing people need.

Abhinaya Ghimire is a tech savvy person who loves keeping information about ICT and media. Graduated from Kathmandu University in Bachelor of Media Stuides, he is equally involved in making short films, documentaries and also has his own photo blog www.abhieg.wordpress.com
@ghimire_abhi
Previous Know everything about social Media – Infographic
Next Five-Year-Old Ayan Qureshi Becomes the youngest Microsoft Certified Professional in the World