WordLens, a mobile application for Android and iOS platforms offering translations live text you see through the camera of the mobile devices themselves, and that months ago was acquired by Google .

The result of such acquisition perhaps we can see in the next update of the translator application of Google, just as indicated exclusively from Android Police , showing through some screenshots from the next version of appointed program running translations of texts directly from the camera: 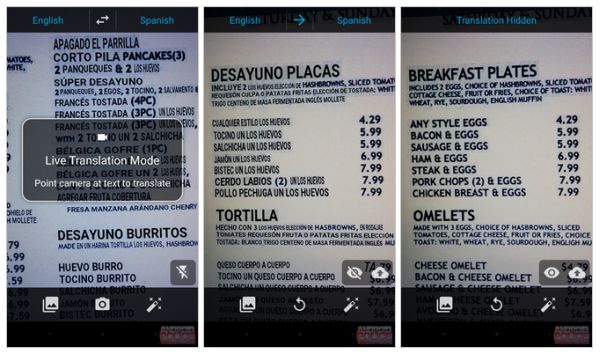 This operation already had available today through the original application, WordLens. Android Police added that initial way, live translations from Google Translate operate in both directions between English and French, German, Italian, Portuguese, Russian and Spanish. It means that the English language must be present in one direction and in another, preventing other combinations of languages where English is not present.

Finally, the next version of Google translator also allows more agile conversations between different languages.So that the application will have active listening in both directions. The none of the users must wait for others to complete a sentence or description, allowing users to perform more natural and smoother conversations.

Abhinaya Ghimire is a tech savvy person who loves keeping information about ICT and media. Graduated from Kathmandu University in Bachelor of Media Stuides, he is equally involved in making short films, documentaries and also has his own photo blog www.abhieg.wordpress.com
@ghimire_abhi
Previous Instagram launched verified badges for celebrities, athletes and brands
Next Prevent your smartphone from going to sleep