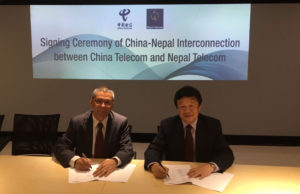 A few months back Nepal Telecom had completed laying optical fiber along Rashudaghi point connecting with China Telecom Global. In the month of May, NT had laid down the optical fiber to Rasuwagadi border point from Kathmandu via Galchhi of Dhading district and Dhunche of Rasuwa district. Now the agreement that has connected with China will pave the way for Nepal Telecom to enhance cross-border connectivity with other countries as well.

So far NT had been purchasing internet bandwidth from India via Bhairawa, Birjung, and Biratnagar custom points. With this agreement has established internet connectivity with China as well.  It has been stated in the press statement released by NT that China Telecom has been expanding fiber links in the Himalayan Region, this expansion will be helpful to develop Nepal as a transit hub for international connectivity.

It has been reported that NT start bandwidth purchase soon after the required examination is completed.

Rebati holds Bachelor's Degree in Journalism and Mass Communication from Tribhuvan University, Nepal also works in Lakshya Nepal as Social Media Analyst, was Radio Jockey in Times FM.
@Nepali_Telecom
Previous Do you use older phones? Take note, WhatsApp will stop running on it from 2017
Next How to save Instagram photos without taking a screenshot