Mobile data market is constantly being more competitive and to keep itself ahead of the competition, the state-owned telecommunication service provider, Nepal Telecom has been frequently bringing out new offers. In line with the growing demand, NT has recently introduced new offer which is Day Data Pack. NT which started providing GPRS from 2063 and 3G service from 2064 has been recently giving high priority to data service, thereby resulting in the launch of the new scheme, day data pack. 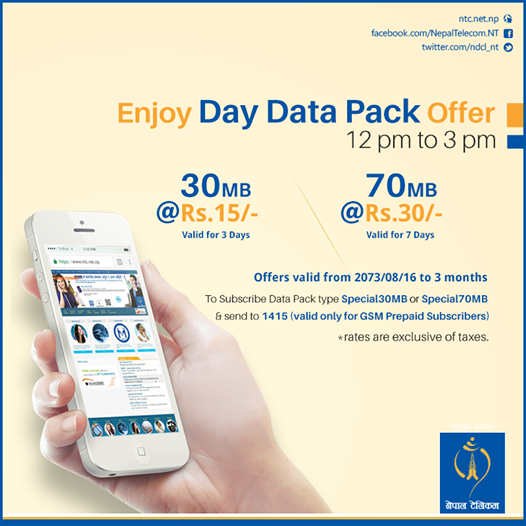 Under this scheme, there are two data packages available, one with the volume of 30 MB and the other with the 70 MB. The 30 MB costs Rs 15 which is valid for three days while the 70 MB data package with the validity of seven days costs Rs 30. These data packs are only for GSM pre-paid customers. They can subscribe to it by typing Special30MB or Special70MB in the message box and send it to 1415. These data packs can only be used in day time between 12 pm to 3pm.

On contrary, Ncell has made the day data packs available which can be used from 5am to 5pm. Nepal Telecom’s rival had launched day data pack offer in the first week of October enabling its customers to surf the internet at as low as 13 paisa per MB.

Rebati holds Bachelor's Degree in Journalism and Mass Communication from Tribhuvan University, Nepal also works in Lakshya Nepal as Social Media Analyst, was Radio Jockey in Times FM.
@Nepali_Telecom
Previous Five security tips to keep your twitter account safe
Next Do you use older phones? Take note, WhatsApp will stop running on it from 2017